If you frequent caves, each one is different. There are different sizes, different entrances, different creatures, and different formations. Formations in the cave are called “Speleothems”. Speleothems come in many shapes and sizes. Towering stalagmites form on the ground while stalactites hang to the ceiling like chandeliers. Some formations flow over rocks or down the ceiling forming flowstone and cave bacon.

Many of the formations are very obvious. While walking through the cave, it is easy to see these wondrous speleothems. However, there are formations that are harder to see. They are tiny and hide in small places. 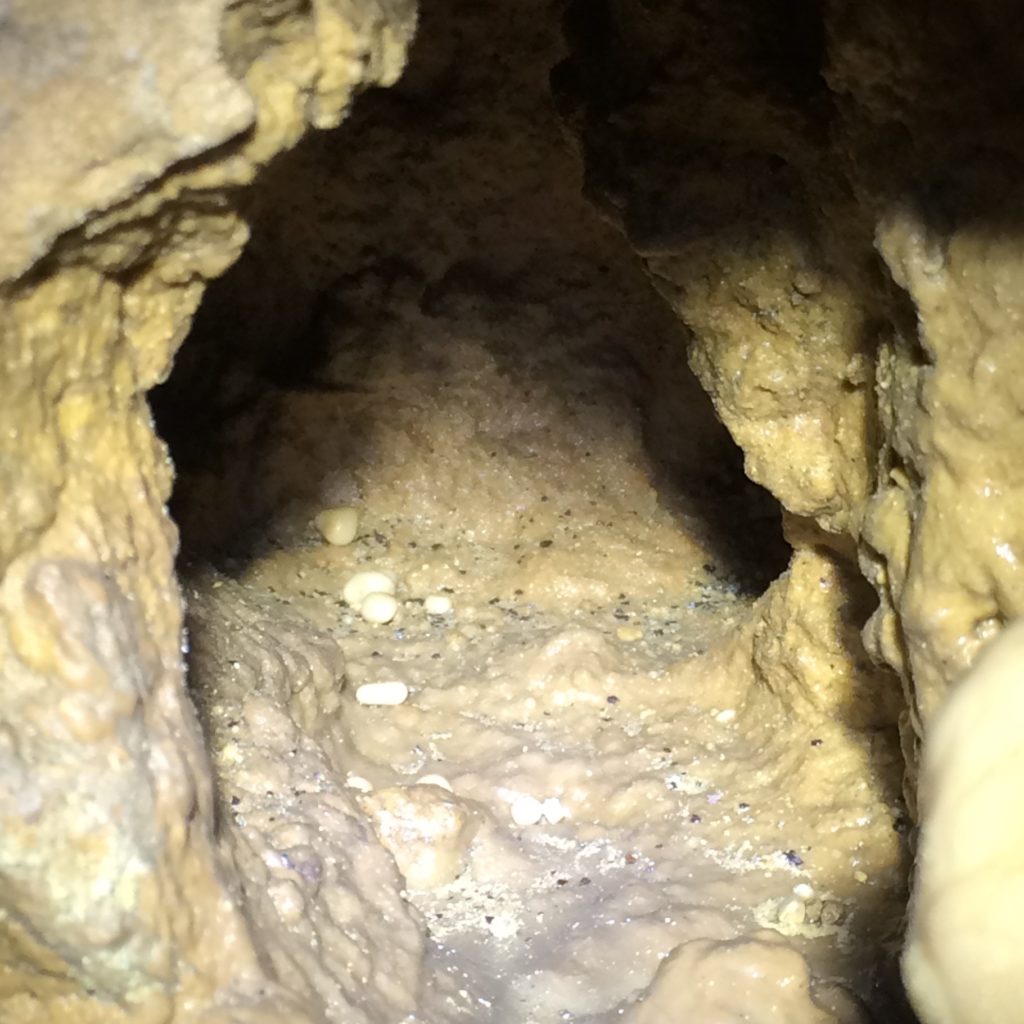 Calcite Oolites or “Cave Pearls” is something that is found in the Cave of the Mounds and is very rare. They are rare in caves and rare to find. Their size is small that it’s smaller than a pea. In food terms, they are about the size of a single millet grain.

These small orbs were found within a small cavity on the wall of the cave in the 1940s.

Cave of the Mounds is formed in Galena limestone. On August 4th, 1939, the quarry on the C. I. Brigham’s farm was blasting this limestone to use in building the local highway. At 11 AM a dynamite explosion went off but the rock fell 30 more feet than the quarry workers had expected leaving two gaping holes. This was the discovery of the Cave of the Mounds.

To find a cave that day was a surprise to all. The cavity had no natural entrance. No person or creature had ever seen the cave before.

Cave of the Mounds was opened to the public in May 1940. During that first summer open, Larry Burns, a geology student from Beloit College, worked as a guide. While he was there, he delicately examined a section of the cave wall with a flashlight. What he found was in a small cavity called a “vug” in a little bit of water. It was about a dozen cave pearls.

When this was found, he reported it to his mentor and manager, Alonzo Pond. Alonzo Pond was a Beloit Alumni and former curator of the Logan Museum of Anthropology. He loved to be in the field and write all about it.

Most of the information that we know today about Cave Oolites are based on an article written by our former manager, famed archaeologist, and writer, Alonzo Pond. He was a manager at the Cave of the Mounds between 1940 and 1945. While he was here, he wrote many articles and papers about a variety of topics. One of which is about our rare, small, hard-to-find “cave pearls”.

In partnership with the University of Wisconsin in Madison, located less than an hour away, Dr. Twenhofel was given one of the cave pearls to study to learn more about this amazing wonder. He cut it in half revealing layers. In the center was a grain of sand with about 14 layers surrounding it.

And we are not the only cave to find these little oolites. Carlsbad Caverns, Cathedral Cavern, and others have found cave pearls in their caves. However, their size and fragility make it hard to share with others as we want to protect them to their fullest extent. The cave will make more and what we have is all that we have. It is part of the cave. It is the pearl of the cave.