Cave of the Mounds is home to almost no wildlife—no bats, no crickets, no salamanders, no fish.  That’s because Cave of the Mounds has no natural openings except the cracks and crevices that allow dripping water to enter. But if water can get in, couldn’t animals that are very, very small also make their way into the cave?  It’s a reasonable guess, and it turns out to be correct!

Cave of the Mounds’ only resident animal is a minuscule creature called a springtail, a creature so tiny it can slip through the same cracks that allow water to enter.  If you spot one on your tour, consider yourself lucky—these harmless arthropods are about the size of a shred of sawdust or a grain of salt and tend to be difficult to distinguish from specks of dust on the pools of water where they are often found.  In general, springtails can eat bacteria, tiny filaments of fungi, or tiny organic particles. 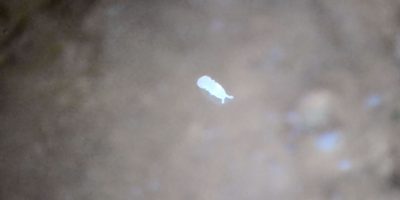 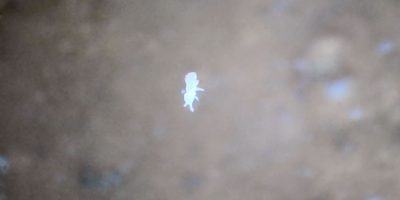 Up close, these minute creatures look like insects—with six legs, segmented bodies, and antennae—but there are some key differences.  The most significant difference is probably the location of the jaws.  Have you seen pictures of ants with their oversized, pincer-like mandibles ready to chomp some food or defend against an attack?  Springtails are much less fearsome!  The small appendages they use to eat are contained in a mouth-like pouch.  Springtails are often described as having “internal mouthparts,” whereas insects have “external mouthparts.” Other important differences between springtails and insects include how they molt, how they reproduce, and how far muscles extend along with the antennae.

As a result, instead of being considered insects, the springtail is considered “non-insect hexapods,” a small category that also includes two other obscure six-legged families called “two-pronged bristletails” and “coneheads.”  All these non-insect hexapods are thought to have parted ways from the lineage of insects hundreds of millions of years ago.  Springtails in particular are thought to have diverged slightly over 400 million years ago, during the Silurian period. (By the way, the Silurian is right after the Ordovician period, when the Cave of the Mounds’ limestone formed.) 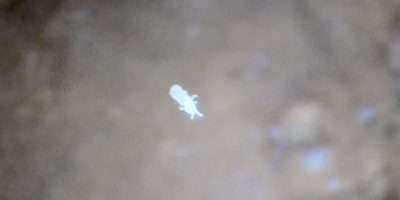 Springtails have several distinguishing features, but the coolest might be the tail that gives them their name.  The forked tail, called a “furcula,” normally lies curled under the springtail’s body.  When a springtail flicks its furcula, it flies into the air at extreme speed, flipping end over end like a freestyle skier or snowboarder.  The distance traveled can be well over ten times the springtail’s body length!

In 1958 it was determined that the springtails found at Cave of the Mounds belong to the species Coecobrya tenebricosa.  This species has been found in a variety of environments worldwide, including caves, but also in soil environments and even human structures such as greenhouses. It is not certain whether those at Cave of the Mounds were native to the cave or introduced after its discovery.