Did you know that in addition to stalactites, stalagmites, and other cave formations, Cave of the Mounds contains a wide variety of fossils?  That’s right, ancient creatures are preserved in the rock right beneath our feet!  Looking at these fossils can take our imaginations back to a time when Wisconsin was a totally different—and amazing—place. 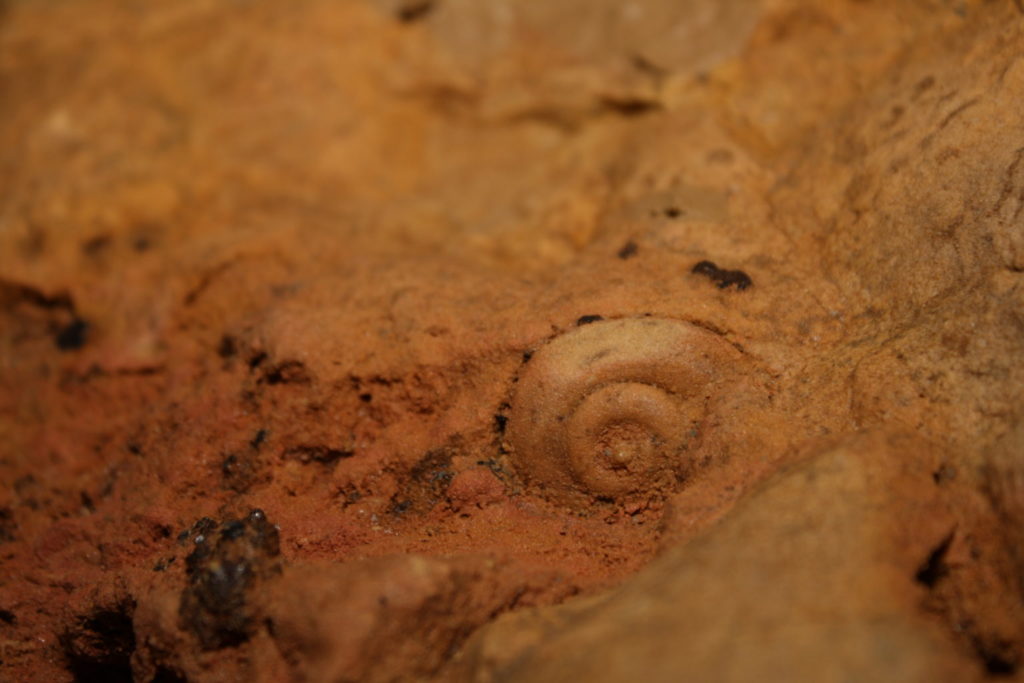 Why would fossils be found in a cave? Wisconsin was once covered by a warm, shallow sea inhabited by shelled animals. Limestone bedrock layers formed as the creatures died and fell to the floor and then mixed with sand and sediment. Over hundreds of thousands of years this sea floor compacted into rock. Shells of these creatures on the sea floor are sometimes preserved as fossils. Fossils are imprints of these ancient sea creatures. Coincidentally, this fossil-rich rock is also a great place for caves to form, because it’s easy for water to sculpt and dissolve.

As we walk through the cave’s water-formed passageways we can also find fossils of prehistoric ocean life. Our rock contains fossils of ancient snails called gastropods, clam-like animals called brachiopods, sea-lilies known as crinoids, and rugose corals shaped like horns. There is also a variety of cephalopods—ancestors of the squid, octopus, and nautilus—that carried elaborate, hat-like shells. These shells could be straight or coiled. Cave of the Mounds has a six-foot-long straight-shelled cephalopod on the cave’s ceiling.

All of these sea animals have something in common: they’re soft-bodied creatures, without bones.  That’s because the sea that made the cave’s limestone existed a really, really long time in the past—over 400 million years ago.  That’s hundreds of millions of years before woolly mammoths, dinosaurs, and all but the most primitive fish!  A cave tour is like taking a long trip back in time!

Fossil fanatics take note: with the exception of the six-foot cephalopod fossil, the fossils in Cave of the Mounds require some guidance to locate. We recommend bringing a flashlight to look for some of our fossils, and let our staff know that you hope to find fossils so that we can point you in the right direction!