The Driftless Area is the portion of Wisconsin that was never covered by glaciers. During the ice age, roughly 1.5 million years ago, glaciers covered the northern and eastern parts of Wisconsin. These glaciers acted like bulldozers picking up rocks and sediment as they scraped across the landscape. All those rocks and sediment are what we call drift and as the glaciers retreated and melted they left their drift across the landscape. However, glaciers never touched Southwest Wisconsin so they were never able to leave their drift behind. Thus, we call this area the Driftless Area because glaciers were never there. 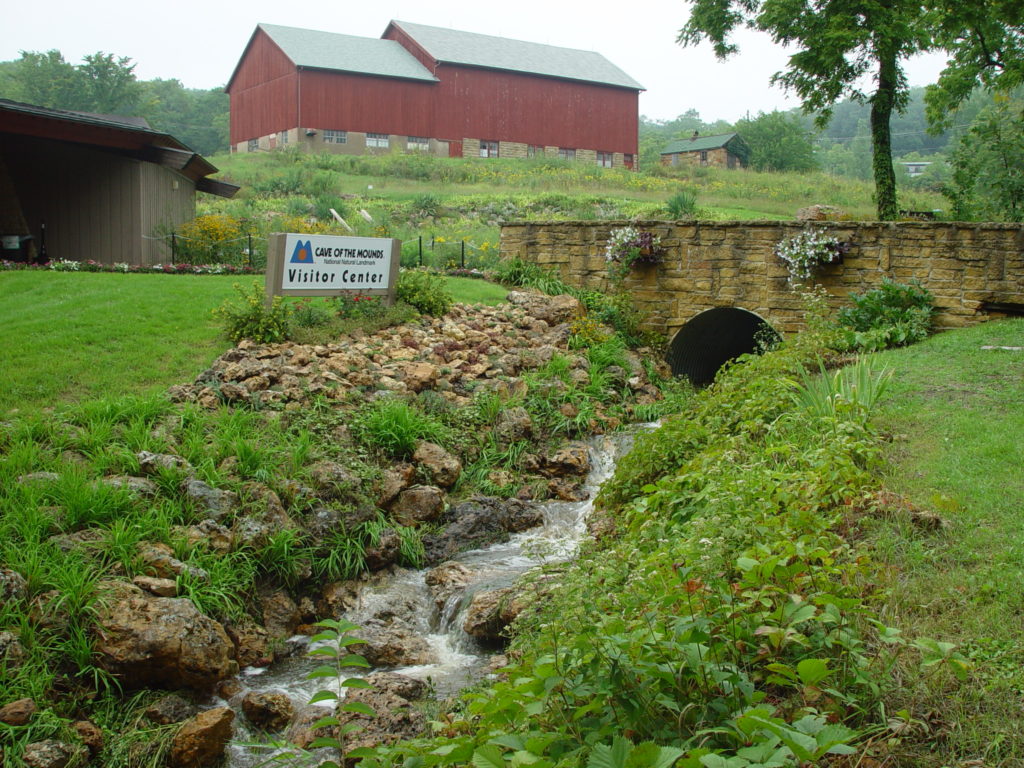 The Driftless Area has what is known as a Karst landscape. Karst means that there are many sinkholes and caves due to the limestone bedrock.

While walking on the Cave of the Mounds Karst Trail, there are 10 notable spots with much to see in this Karst Landscape.

At the first stop, labeled with a “K1” in red, there is an oak opening that is typical of the landscape in this area prior to the European settlement of Wisconsin. More than 200 years ago, oak savanna and prairie ecosystems thrived here. This area is actively being restored. Widespread oak limb growth patterns are characteristic of the Oak Savanna Ecosystem, which is one of the most endangered on Earth. A fraction of intact examples of oak savanna vegetation remains in Wisconsin, less than 0.01 percent of the original 5.5 million acres from pre-settlement times. 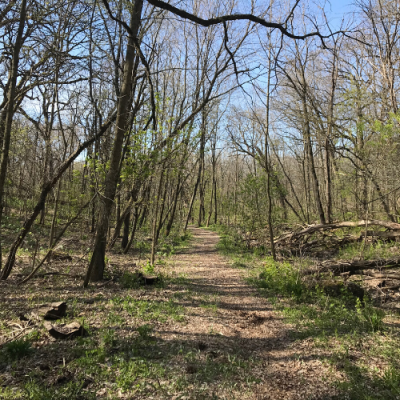 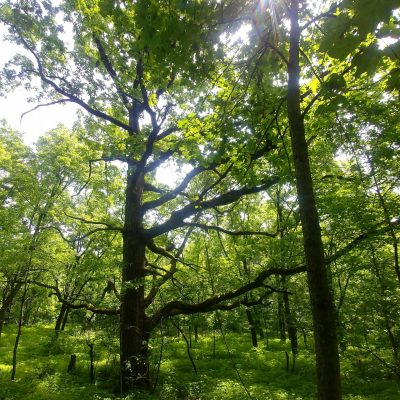 As the trail continues up the hill, along the Oak Savanna edge, there is another stop to be seen. Although it may not seem like much it is a great example of this area. This vantage point is about 1380 feet above sea level. Observers can look south and see for miles on a clear day. This land was, for millions of years, the floor of a warm shallow inland sea. Over time, rivers, streams, and glacial meltwaters eroded deep valleys, carving out this once flat plain in the Driftless Area.

Once on top of the hill, there is a deep depression in the ground roped off for safety reasons. This feature is named “School Sinkhole”, for the large number of school children who have been educated here. Sinkholes are the evidence of a near-surface cave below. A short distance to the northwest is Oscar’s Sinkhole, named for the man who discovered it when it formed suddenly in 1996. Sudden sinkhole appearance is the result of the gradual settling of earth materials. 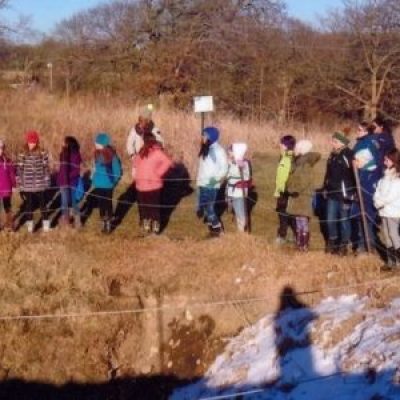 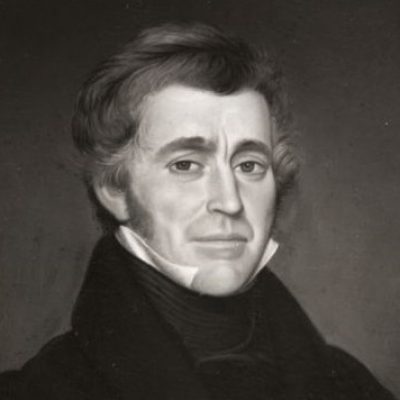 Moving eastward, there is another bowl-shaped depression, only this one doesn’t have steep edges like “School Sinkhole”. The Brigham Sinkhole is one of many on the grounds. Geologists describe a landscape that includes sinkholes and caves as a Karst topography. When limestone rock dissolves underground, which is an important process in the origin of limestone caves, the land surface above ground is also affected. These geologic processes lead to this distinctive type of landscape.

The next bit is a little off a marked trail. Rather moving towards the big red barn. This big red barn and the one next to it are historical markers. The smaller brown barn is an old horse carriage from the 1800s built by Ebenezer Brigham. Ebenezer Brigham came to Wisconsin in the 1820s during the lead rush. He settled here in Blue Mounds in 1828. This First European Settlement in Dane County became a trading post, stagecoach stop, inn, and Dane County’s first post office. Brigham’s place provided important services that helped others pursue their own lead treasure. 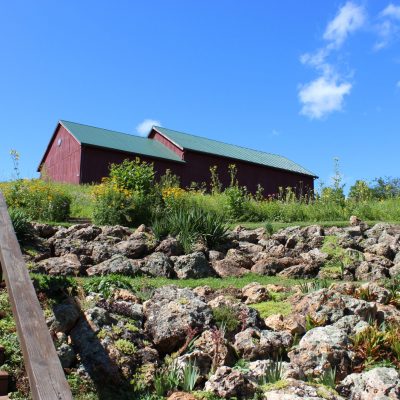 The Big Red Barn was built in 1883 by J.R. Brigham, Ebenezer’s nephew. When Ebenezer passed away in 1861, having no heirs, he left his land to his niece, H.G. Bliss, and his nephew, J.R. Brigham. Charles Brigham, J.R.’s son, attended the University of Wisconsin in Madison for agriculture. Originally, Charles had planned to teach but after a year in Colorado, he returned home to start a dairy farm.

This farm was used as a dairy farm for decades. From 1907 to 1911, Mr. Brigham turned in detailed reports and statistics on his farm operations to the U.S. Department of Agriculture which contributed to early studies of dairying, breeding, and farm management. These reports constituted the first of their kind.

Today this barn is used as a classroom for field trips and lectures. 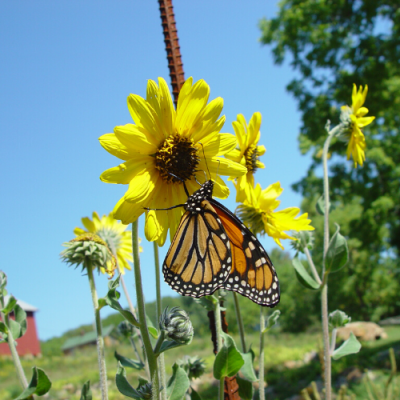 Right next to the barn is a beautiful garden landscape. The quest to reestablish native plants to this landscape began on the land below the barn. Work is underway to restore the land to the native prairie and savanna ecosystem using local genotypes. This planting will be used as a seed orchard and Prairie Demonstration Garden allowing us to expand this unique ecosystem while educating our many visitors about prairie and savanna restoration efforts.

There is a pathway through the garden. It leads to a small footbridge. The stream below this bridge is an intermittent stream. Sometimes it runs dry; at other times it flows heavily. It may even disappear entirely and reappear further downhill. Intermittent streams are very common in areas with caves. This happened because water always takes the path of least resistance and crevices in rocks with caves below to make good conduits for surface streams.

This stream begins at a spring higher up on the mound. These springs occur when water seeping down from the top of the mound encounters an impervious layer of shale. The water backs up and creates a perched water table. The water then flows laterally out of the hillside.

Continuing on the marked pathway leads to an open area marked only with a stake that reads “K7”. This area is called the North End Sinkhole, formed because the cracks in the rock above the cave intersected and created a naturally weak cross joint. You are now standing above the section of Cave of the Mounds where the East Cavern connects to the North Cavern. Many visitors on the Cave Tour below marvel at the beautiful Painted Waterfall that lies about 40 feet below the surface here. This is one of many sinkholes in the Driftless Area. 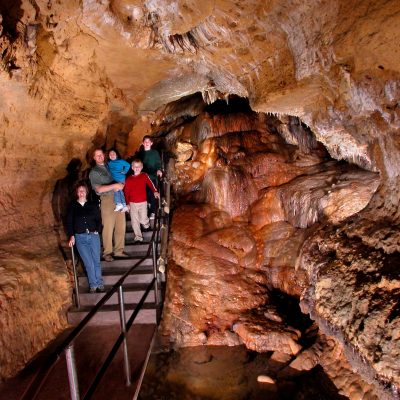 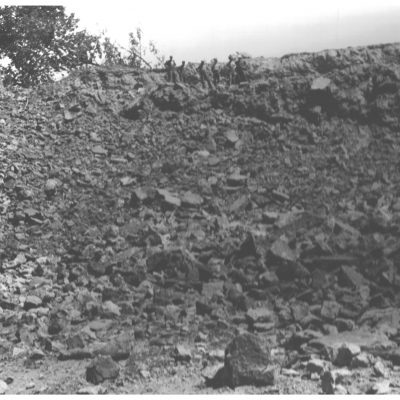 Continuing on up the staircase and to a fenced area by some boulder. This marks an area important in the Cave of the Mounds history. Please do not lean or push the fence for safety reasons. However, from this vantage point, a U-shaped rock wall that surrounds the Cave Entrance Building can be seen. This is what remains of a Limestone Quarry. Quarrying for local needs began on Brigham Farm in 1903 and continued until the accidental discovery of Cave of the Mounds on August 4, 1939. The area in which “K8” is marked is where quarry workers stood, looking in amazement at the mysterious hole in the rock wall left behind by the routine blast. Shortly after that blast, the Cave was entered by humans for the very first time. A look across the road behind you reveals a shelter above a Mine Shaft. It was built to assist in the construction of a bypass tunnel that runs under the road, along the underground cave passageway.

Moving on towards the parking lot, there are two more markers over here. The first is located on a small mound. This small mound is deceiving. It sits above the Meanders section of Cave of the Mounds—with twists and turns downward like water descending a drain. This spot marks the Deepest Point that visitors travel, 70 feet below the surface, while underground on The Cave Tour. There are many caves to be discovered in Wisconsin and most of them are in the Driftless Area. 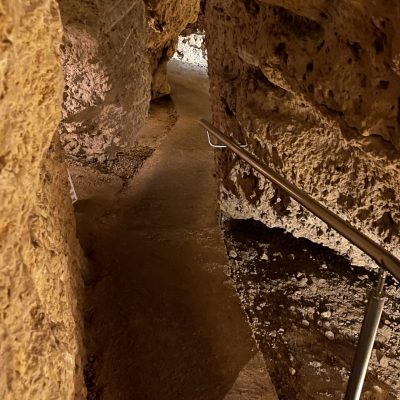 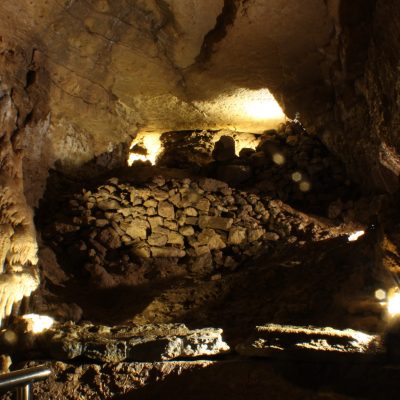 Finally, the last marker near what is today a sign. A giant Burr Oak once stood here, masking this remnant of the South End Sinkhole. Years of erosion have slowly decreased the size of this sinkhole, filling it in with dirt and sediments. You are now standing about 40 feet above the South End of Cave of the Mounds. Below you in the Cave, stalagmites stand like towers along the South Cavern trail. Stalactites hang down from the ceiling and the constant drip of water can be seen and heard all around you. A Giant Cephalopod fossil can be observed in the limestone ceiling of this section of the Cave.

The Karst Trail is finished but another area that we did not explore is the cave. The cave is a monumental example of Karst Topography with fissures, formations, and clues to how the earth has changed over millions of years. It is one of the most unique places in Wisconsin and is considered the Jewel Box of America’s Caves for its variety and delicacy of formations.

Another source to learn more about the driftless area is the Driftless Area Karst Trail website. 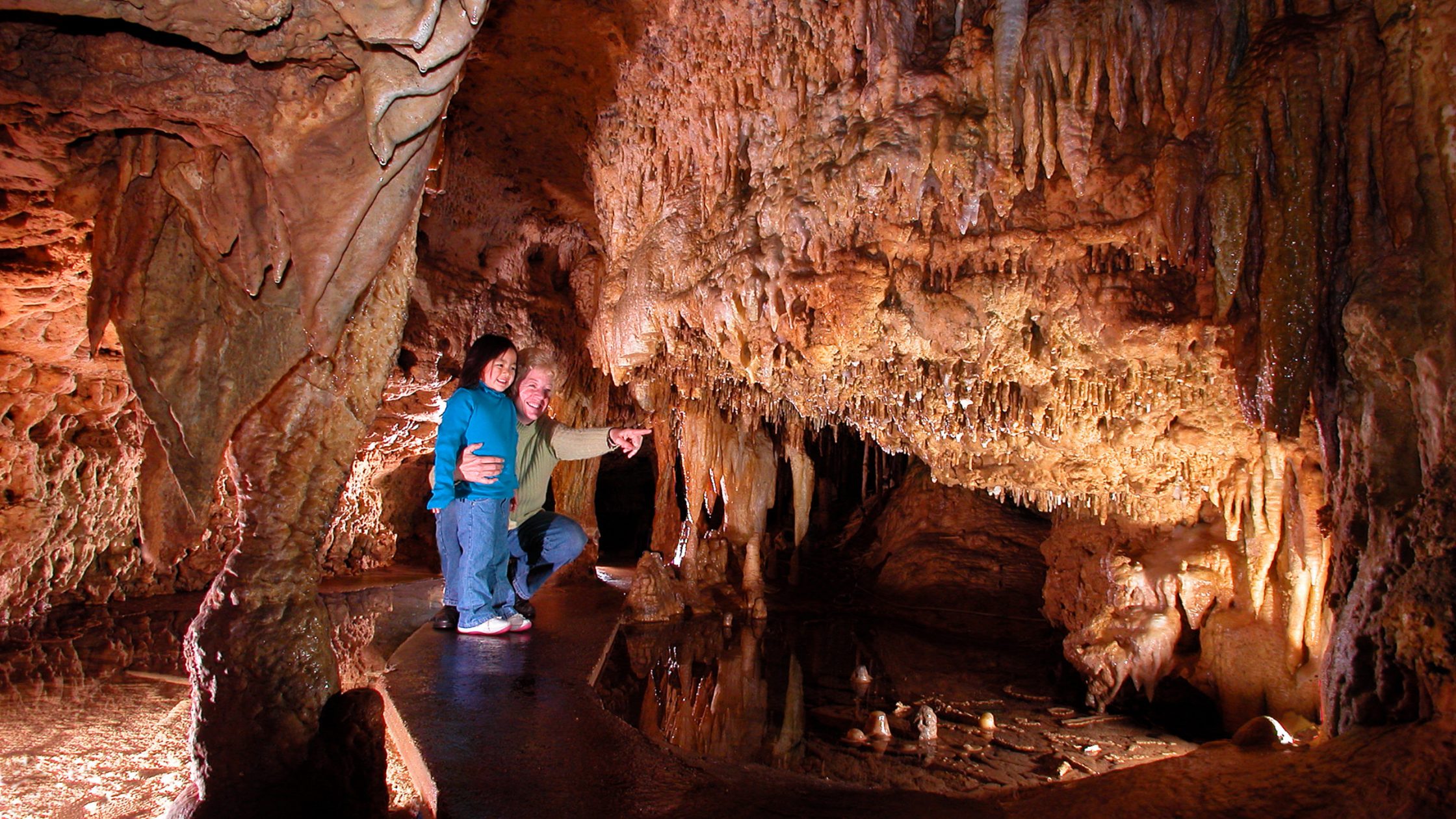