For January, Cave of the Mounds has an exciting educational add-on called Glow Below. For only $2 per person, you get a reusable bag and get to collect two fluorescent specimens along the cave tour. We have two stations in the cave with blacklights to show off these fluorescent beauties and you get to personally pick out your favorite one to take home with you!

The first fluorescent specimen you encounter along the trail is fossilized tree sap, also known as Amber. Under regular LED lights this appears yellowish-brown and semi-translucent, but under a blacklight these specimens fluoresce bright green/blue. The coolest thing about Amber is that it can sometimes contain remains of ancient life. Insect and plant material sometimes became trapped in the sticky tree sap, then later fossilized for scientists to study many years later. Over 1,000 extinct animal and plant species have been identified in Amber! 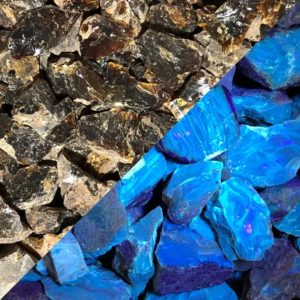 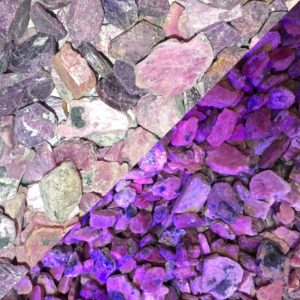 The second fluorescent specimen you encounter is a rough ruby. Yes, you heard us right, a rough ruby! Rubies get their red color from the metal chromium, and it is this metal that causes them to fluoresce bright pink under ultraviolet light. Rubies are a variety of a mineral called corundum, and when corundum comes in any other color it is called a sapphire. The coolest part is that the only other natural occurring gemstone that is harder than a ruby is a diamond. Pretty neat!

So, when you visit Cave of the Mounds in January, you not only will get to see an amazing limestone cave with many beautiful stalactites and stalagmites, but you will get to see and collect fluorescent specimens to take home with you! Come check it out soon because this will only be offered in January!