What if I told you you could create light by rubbing two quartz crystals together? Don’t believe me? Check out this video.

Do you think I am the greatest magician ever? Well, even if I am still waiting for my letter from Hogwarts, there is no magic involved in this activity. It is simply science.

Let’s break this down and understand what is happening. When you go into a dark room and rub two quartz crystals together, you will start to see them glow. This process is called Triboluminescence and it is a flash of light produced from the energy of friction, impact, or breakage. It is considered a “cold light” because no heat is produced.

Why is the light produced? The phenomenon of triboluminescence is still not completely understood. Some researchers believe that scratching or hitting materials together provides an input of energy that excites their electrons. When the electrons return to their normal state, a flash of light is given off. Others believe that triboluminescence is similar to lightning, and is caused by an electrical current generated from the force applied to the materials. The electrical current travels through the material, causing trapped molecules of gas to glow.

The flashes of light produced by triboluminescent minerals are usually white or orange, but other colors are possible. It is also possible that light is produced in wavelengths we cannot see. How neat is that?

Another interesting material that shows triboluminescence is Wint O’ Green Mints. In a dark room, you should see a blue flash of light when they are crushed with a pair of pliers or your teeth. The crystalline sugar in the candy is thought to be the source of the triboluminescence while the flavoring may be what produces a blue fluorescence.

Want to try this at home on your own? We have Triboluminescence Kits available for purchase in our gift shop and they include two quartz crystals, Wint’ O Green mints, and instructions for how to create your glow at home!

Want to try this at home on your own? We have Triboluminescence Kits available for purchase in our gift shop and they include two quartz crystals, Wint’ O Green mints, and instructions for how to create your glow at home! 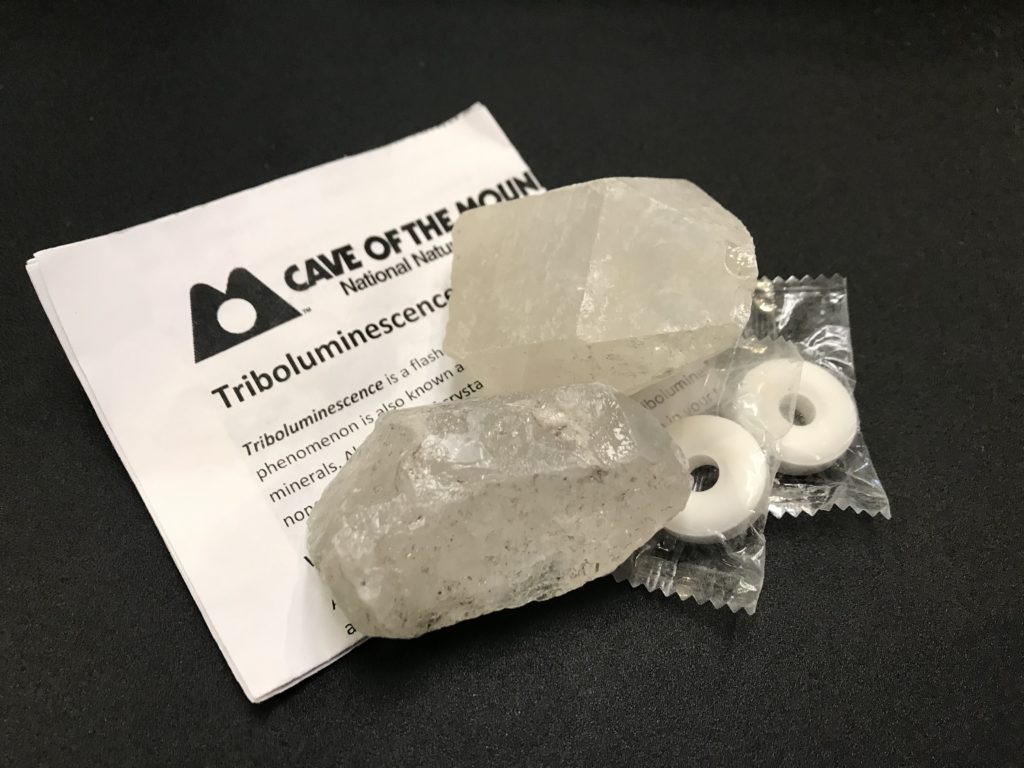